The three works on this program span the first half of the twentieth century: its beginning (Rachmaninoff), World War I (Respighi), and World War II (Poulenc). Going backwards chronologically, this recital explores these composers’ takes on the genre of duo sonatas and the concept of tonality. One can track the progress of the pitch D as it plays a different role in each work: the tonic of D minor, the mediant of B minor, and the dominant of G minor. The idea of cyclicism also receives different treatment in each sonata, as the three composers seek to create a sense of unity within a multi-movement work.

The biting wit of Francis Poulenc (1899-1963) finds expression in both music and words. Writing to the musicologist André Schaeffner (1895-1980) in 1942, Poulenc expressed his thoughts on violin sonatas and tonality as follows:

I have revised and completed the rough draft of a Sonata for piano and violin. The monster is now ready. It is not too bad, I believe, and in any case very different from the endless violin-melodic line sonatas written in France in the nineteenth century. How beautiful Brahms’ sonatas are! I did not know them very well. One cannot achieve a proper balance between two such different instruments as the piano and the violin unless one treats them absolutely equally. The prima donna violin above an arpeggio piano accompaniment makes me vomit. Debussy, somewhat breathless in his Sonata, has nevertheless succeeded in turning it into a masterpiece by sheer instrumental tact. …

I am well aware that I am not the kind of musician who makes harmonic innovations, like Igor, Ravel or Debussy, but I do think there is a place for new music that is content with using other people’s chords. Was this not the case with Mozart and with Schubert? And in any case, with time, the personality of my harmonic style will become evident.

Poulenc’s (non-vomit-inducing) sonata was first sketched in 1940, reworked in 1942-43, and given its first performance in June 1943 by Ginette Neveu (1919-49, for whom it was written) and Poulenc. It was his third attempt at a violin sonata: the first (written in the late 1910s) was incomplete and unpublished, and the second (1924) he destroyed. In terms of his chamber music output, the 1940s also yielded the Sonata for Cello and Piano, and a string quartet that Poulenc destroyed in 1947 and called “the embarrassment of my life” in an interview in the early 1950s with the music critic Claude Rostand (1912-70). The same interview shows that, despite the revisions made to the last movement of the violin sonata in 1949, Poulenc remained unsatisfied with the work:

There are some tasty details in the violin part, entirely due to Ginette Neveu who was a great help over the instrumental writing, but otherwise the Sonata is frankly no good … because of its tone of artificial pathos. To be honest, I don’t like the violin, as a solo instrument … but how could I resist a suggestion from Ginette Neveu! …

I’d always wanted to dedicate a work to the memory of [the playwright and poet Federico García] Lorca [1898-1936] (this is where literature makes a tiresome interruption). I took my inspiration from one of his famous lines: ‘The guitar makes dreams weep’ (it’s beautiful, even in translation), and started by composing a kind of ‘Andante-cantilena’ that’s vaguely Spanish. Then I had in mind, as a finale, a ‘Presto tragico’ whose lively, rhythmic élan would be suddenly halted by a slow, tragic coda. A wild first movement would establish the atmosphere. All that, despite Ginette Neveu’s technical innovations and her genius as a player, didn’t amount to much.

The cyclicism and thematic unity of the B minor Sonata for Violin and Piano by Ottorino Respighi (1879-1936) is much plainer to see, with a single, easily identifiable motive (an upward leap of a seventh followed by a downward step) making its presence known throughout the work, whether as the germinal basis of the first movement, as the climactic outcry of the second movement, or as an integral part of the ground bass in the last movement. Known for his triptych of symphonic poems, Fontane di Roma (Fountains of Rome, 1915-16), Pini di Roma (Pines of Rome, 1923-24), and Feste romane (Roman Festivals, 1928), as well as his three orchestral suites, Antiche danze ed arie per liuto (Antique Dances and Airs for Lute, 1917, 1923, and 1931), Respighi’s interests in colorful textures and music of the past find their expression here in a much more compact medium, with instruments that he played and knew well.

The high drama and emotional nature of the violin sonata, written in 1917, can perhaps be traced back to Respighi’s grief over his mother’s death the previous year, which caused him to temporarily leave his teaching post at the Liceo Musicale di Santa Cecilia and seek refuge in a hermitage to cure his neurasthenia. The sonata is deeply Romantic in spirit, with piano writing that is reminiscent of late nineteenth-century French works. A vocal quality pervades the work; Respighi was an active accompanist for singers (including his wife) and wrote numerous operas, cantatas, and songs. Particularly notable in the sonata are his highly original manipulation of the passacaglia variation form in the last movement, with a secondary theme that evolves alongside the bass melody, and his rhythmically complex texture in the second movement, with a syncopated quintuplet figure that is both melodic and accompanimental in turn, creating a unique type of polyphony. The pitch D stands for darkness in this work, for, despite attempts to find respite in B major, with its hopeful D-sharp, the D of the brooding B minor is inescapable and ultimately catastrophic.

This half-step climb from D to D-sharp/E-flat takes on a whole different meaning when it begins Sergei Rachmaninoff’s (1873-1943) Sonata for Cello and Piano, Op. 19: here it is almost as if it sets off a question that the rest of the work attempts to answer. The sonata was written in 1901, shortly after Rachmaninoff’s three-year hiatus from composing due to his despondency over the disastrous performance of his First Symphony in March 1897, which was poorly conducted by Alexander Glazunov (1865-1936). These three years (during which he also suffered from neurasthenia) saw the beginning of Rachmaninoff’s additional career as a conductor, directing a variety of operas and in the process meeting the great bass Fyodor Chaliapin (1873-1938). With help from his friends and sessions with the physician Nikolai Dahl (1860-1939), Rachmaninoff regained confidence and had great success with his Second Piano Concerto, Op. 18, first performed as a complete work in October/November 1901. December then saw the first performances of Op. 19 and his Second Suite for Two Pianos, Op. 17.

The sonata was dedicated to Anatoly Brandukov (1856-1930), a longtime friend and collaborator of Rachmaninoff’s, and the cellist in the first performances of both of his piano trios; Rachmaninoff had previously also dedicated his Op. 2 pieces for cello and piano (1892) to him. It would seem that after their first performance of the sonata, Rachmaninoff revised the finale, appending the rousing ending that gives the work its cyclic nature. The sonata is also unified by the use of the half-step, whether in the pleading motif of the first movement’s secondary theme, or in the menacing scalar descent of the second movement. The half-step also plays into the heart-wrenching quality of the third movement, in which the perfect fifths of the melody constantly struggle for purity and simplicity against the dire chromaticism and tonal ambiguity lurking beneath. The final movement then luxuriates in the hard-won triumph of major over minor, but not without its own moments of darkness. There is something rather human about the journey that this sonata takes, and Rachmaninoff stays true to the flesh and blood of it till the very end. 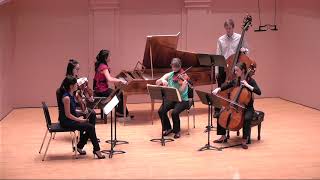 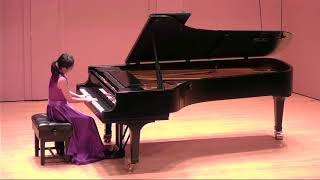 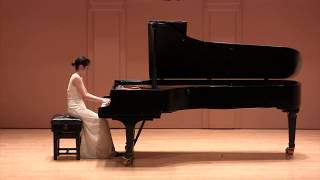